Fighting Robot
Bjornbot is a robot built by Bjorn Bjornson. He was built to become the best fighting robot in the world, like Robotboy he has super strength, multiple weapons and can Superactive as well. He bears a resemblance like his creator only more blue his skin is colored blue, his hair is grey and he has red pupils.

He looks similar to his creator Bjorn, except he's blue-ish metal and his eyes are red.

In Party Out Of Bounds, in his "Sister Bjorn" disguise, he wears a blond wig, a magenta dress, pink skirt and black leggings, and has lips, however, he's grey metal instead of being blue-ish metal.

In Robolympics, he's shown to be a couple inches taller than Bjorn.

His power is shown to be comparable to Robotboy's. To the point he can even superactivate. He shows basic combat knowledge and is also pretty athletic. In Runaway Robot (while superactivated) and Robolympics, he was shown to be able to fly without thrusters. Also, in the latter episode, he was shown to have fire breath and a rocket launcher cannon. It was shown in Brother Bjorn he could survive without his head and it was implied he runs on batteries.

Despite of having fire breath, he's vulnerable to fire.

A good relationship. In contrast with people like Constantine and Ludwig, Bjornbot is treated fairly well by Bjorn Bjornson and vice versa. Bjornbot is fairly supportive of his creator. They rarely show aggression to each other.

Bjornbot hates Robotboy with a passion, because he is jealous of him. Both are bent on destroying each other (as per robot fighting rules (and at least until Robotboy stopped fighting due to Tommy being upset about it)), but are perfectly equal. Because of their equality in strength, it is said by Moshimo that they could fight for all eternity until they both destroy each other.

A very bad relationship. He once tried to beat up Gus for unintentionally farting in his and Bjorn's direction.

A bad relationship, though they don’t interact for long.

A bad relationship. He has both attacked and threatened to attack her. 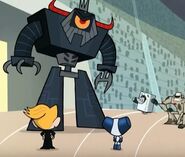 Accidentally recolored to look like his creator.
Add a photo to this gallery
Retrieved from "https://robotboy.fandom.com/wiki/Bjornbot?oldid=20894"
Community content is available under CC-BY-SA unless otherwise noted.