"Brother" is the 13th of the series episode and the 7th(a) of Season 1 of Robotboy.

When Robotboy finds out he has a long lost brother, he is desperate to meet him! As it happens, his brother, Protoboy, was one of Moshimo’s first ever creations and accordingly was captured by Kamikazi at an early age! Moshimo explains that it isn’t a good idea to track down Protoboy as Kamikazi made him so evil that even the evil doctor couldn’t control him! Robotboy ignores this advice, under the impression that Tommy can fix Protoboy and heads straight for Kaziland, where he finds his brother deactivated in the ‘failed experiments’ room! Once Protoboy is reactivated, his behaviour soon becomes apparent to Robotboy as he wreaks uncontrollable havoc everywhere he goes. Robotboy and his real family; Tommy and Moshimo, face an exceptionally difficult battle to halt Protoboy’s destructive plans!

When Tommy's family is out on a family day, Robotboy is left alone. After talking to Moshimo, he tells Robotboy that he did have a brother once, called Protoboy. Robotboy goes to Kamikazi island and frees Protoboy. Protoboy is evil and starts wrecking everything Robotboy eventually has to defeat him.

The battle against Protoboy took a lot out of Ro. :'(

Tommy just looks so unfazed, like this sort of thing is just a normal day for him. Ro is so caring. ;3;

Protoboy is bigger and badder! :O

Moshimo: Robotboy! The weapon you downloaded today, use it! Ro: Eh...

Every villainous robot feels the need to be superior to Ro. 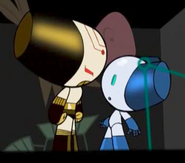 Retrieved from "https://robotboy.fandom.com/wiki/Brother?oldid=18751"
Community content is available under CC-BY-SA unless otherwise noted.