Cartoon Network often abbreviated as CN is an American cable and satellite television channel that is owned by Time Warner through the Turner Broadcasting System subsidiary. The channel airs primarily children's show mostly animated programming, ranging from action to animated comedy. It was launched on October 1, 1992.

As of January 2016, Cartoon Network is available to approximately 94.0 million pay television households 80.7% of households with television in the United States.

In 2005, the UK division of Cartoon Network, Cartoon Network Europe, co-created the animated series Robotboy, along with the award-winning French animation studio Alphanim now known as Gaumont Animation, the French TV channel France 3, Cofinova 1 & LuxAnimation. Cartoon Network is also the channel that aired Robotboy in most of Europe and the United States until its end in 2008. They were also the ones who promoted the series, released merchandise for it, and organized the competition Robotboy and the Island of Doom.

Cartoon Network has its own microsite for Robotboy. Although this Robotboy page was bigger and had more features in the past when the show was still airing full-time like character profiles, downloads and information about the show it's still online to this day, but only has three video clips from the series and the games Tommy Takeaway and Depth Charger.

Until 2015 the description about Robotboy on the Cartoon Network website was:

Robotboy is one nifty piece of kit, although he has an emotional chip that makes him more like a real boy. When Deactivated Robotboy fits snugly into a backpack, when Activated he is very active indeed, and when Super-activated he is practically invincible! With the help of his best friend and mentor Tommy Turnbull, Robotboy strives to evade the insane clutches of Dr. Kamakazi, a decidedly odd little creature with plans too grand for his mediocre abilities. Robotboy also has the help of plane flying Lola, which comes in handy when Dr. Kamikazi’s giant henchman Constantine is about! Remarkable is that neither Gus or Professor Moshimo are mentioned.

Since 2016 the new description is:

Robotboy is a super-advanced robot prototype who is sent to live with Tommy Turnbull and his friends to avoid falling into the hands of the evil Dr. Kamikazi, who would use Robotboy for his own despicable ends.

In between 2010 and 2016 maybe, Cartoon Network UK brought back Robotboy but only at 3:05 am and the 3:05 am run of Robotboy ended to this day running 4:05am on Cartoon Network +1 Cartoon Network stopped airing Robotboy at the 1st of June 2018 after broadcasting it for over 13 years. Before that, other Cartoon Network channels in other countries already stopped with airing the show. 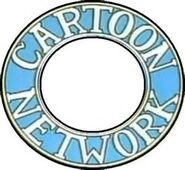 Before Cartoon Network started broadcasting in 1992, this logo was used in its marketing to cable operators and advertisers. The middle of the logo could be edited to feature characters from shows that were planned to be aired on the network.

Cartoon Network's famous checkerboard logo, from the year it was launched (1992) until 2004.

Cartoon Network's CN logo from 2004-2010, and the one used while Robotboy was airing there

CN's logo from the time they were airing marathons of Robotboy 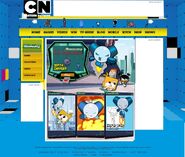 Robotboy button used on the Cartoon Network website from 2013 - 2015

Current Cartoon Network UK as of now
Add a photo to this gallery
Retrieved from "https://robotboy.fandom.com/wiki/Cartoon_Network?oldid=17621"
Community content is available under CC-BY-SA unless otherwise noted.