Bumpers are short animations that appears between shows and commercials or when a show-broadcast is over and a new one starts.

Cartoon Network uses bumpers mainly between shows and after commercials.

From 2006 till 2012 they also aired some specially made Robotboy related bumpers.

On June 14, 2004, Cartoon Network debuted an updated version of its original logo (with the checkerboard motif retained and the "C" and "N" being the centerpiece) and the new slogan:, "This is Cartoon Network!"

The bumpers introduced as part of the rebrand were produced by Animal Logic, and featured 2D cartoon characters from Cartoon Network shows interacting in a CGI city composed of sets from said shows.

During April 2006, there was a revamp of the CN City look using flat, dark, psychedelic colors, and a male announcer replacing the previous one (Nikki). This was presumably done to go along with Cartoon Network's "YES!" campaign they were running at the time, featuring characters from their shows acting out behind a red background. These updated City bumpers continued until June 2007.

While many of these bumpers are available on the Internet, several of them have yet to be found. The 2004-06 bumpers are fairly common, whereas the 2006-07 ones are comparatively rare. It is unlikely that they will all ever be found, as there are hundreds of them floating around.

When a show was being announced, a female broadcaster would say which show wouldl come next, followed by the slogan: This is Cartoon Network. All the shows were announced with a traffic light. So all shows had there own sign in the traffic light with the first show to air at top (in place of the red light) and the show that would be broadcasted afterwards at the bottom (on the place of the green light).

There are five known Robotboy Bumpers and five bumpers where Robotboy characters appear in. There were a lot more, but they are considered lost. Because the show got it's bumpers around mid-2006, and the City Area stopped a year later, there also weren't a lot made.

When a show was being announced, they were being placed in a Traffic Light. Robotboy also had his own unique sign in this traffic light.

The bumpers that can be found online are:

The Nood and Toonix Area

In 2008, Cartoon Network began using a fictional species called "Noods". The noods are white dolls who kept up walking trough rainbows, paints or each other and every time were changed into a Cartoon Network character. The kept the same shape and couldn't talk. Robotboy had only one ''Nood'' and it only showed up when the show was being announced. The Noods were only broadcasted in the United States.

In Europe the Noods were replaced with Toonix. The idea is the same, but the dolls are now smaller and instead of cone-like, they are more square. They are white, but most of them do already have a color of character, without losing them. Also the Toonix can show emotions, but mostly only smiling or being scared. The Toonix and Noods were replaced mainly in 2011.

CHECK is a new identity for the channel that was introduced on May 29, 2010 in the US, along with a new theme and new bumpers. In Europe the branding is being used since 2011 and in some countries after 2012. The network's current branding, designed by Brand New School, makes heavy use of the black and white checkerboard which made up the network's first logo, as well as various CMYK color variations and various patterns.

Only three Robotboy related are known. One is a short video-announcement for Robotboy with three black blocks that shows three different segments from the episode Robotman. And the other one is a simple turning block with a picture from Robotboy from the episode Up a Tree with an announcer mentions a short story and the announcement of Robotboy coming. The first one was only short used and the second untill december 2016. As of 2017 a new one for the European market was made using sements with episodes from season 4.

The only 'NOOD' from the Nood area with Robotboy

The short video announcement with scenes from Robotman

A Scandinavian bumper from 2006 where they showed information about new episodes of Robotboy's 2nd Season. There was a live competition where you could win various prizes including a Robotboy Action Figure and a PSP 1000.

Tommy's appearance in the KND bumper 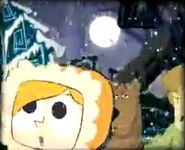 Tommy with Shaggy and Scooby-Doo

Community content is available under CC-BY-SA unless otherwise noted.
Advertisement