Sports and Bullying Tommy
Donnie Turnbull is Tommy's older brother (and later, baby brother but only at the end of the episode "Zap! You're Old") and is a secondary antagonist in the series, who is a constant bully to almost everyone he encounters, including Gus, and Tommy himself.

He frequently calls people names, threatens them and yet despite this Tommy still cares about him and treats him as family. Sometimes he has been exploited due to his attitude for other people's benefit, particularly by Dr. Kamikazi.

Donnie has small ears, an unibrow and three freckles on his head, he wore a grey t-shirt with a light-blue skull, with bright-blue trousers, and black shoes, he also wears a spike bracelet on his right wrist.

As of Season 3, he wears a completely red t-shirt (the skull briefly returns in The Old Switcharobot in a goof and it's colored black).

In Time Transmission, he wore a green humanoid fish mask with yellow eyes and sclera, with dark green spots on his face with a tentacle-like moustache and has red hair.

In Donnie Turnbull's Day Off, he wore a green fish mask with fangs and yellow eyes.

later in the episode, he doesn't wear shoes. later he receives a black eye and loses tooth. 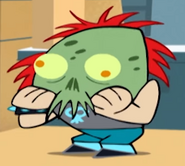 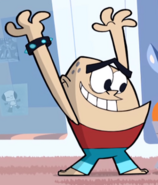 Donnie with a black eye

Donnie with pink skin and a white underwear 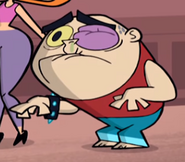 Add a photo to this gallery
Retrieved from "https://robotboy.fandom.com/wiki/Donnie_Turnbull?oldid=20847"
Community content is available under CC-BY-SA unless otherwise noted.