Nursing a Grudge (out of chronology order)

Felonious Hexx (formerly Thelonious Hexx) is a magician who despises Gus and is his archenemy. He was voiced by Lewis MacLeod.

Felonious Hexx was once a famous magician in all of the Bay Area, and he was loved by every child in the Bay Area, except for Gus. Due to Gus’ heckling, the kids and Gus started to humiliate him and ruin his reputation. After his magic career was canned, he swears he will get revenge on Gus so that he won’t be heckled anymore and win back his reputation. Throughout the series, Hexx went from working as a magician to a nurse, a dentist, and finally a nanny to make ends meet while also, ironically, confronting Gus each time.

he wears a top hat with a purple stripe, his cape is dark turquoise, a black cloak, a purple bowtie and has a beard.

in Nursing a Grudge, he wears a nurse outfit, and every time he's furious, his skin goes pink and his eyes go yellow.

in Gus's Big Mouth, he wears a dentist outfit.

in A Tale Of Two Evil Geniuses, his cloak is purple, his skin is pale and his hair and beard are orange. 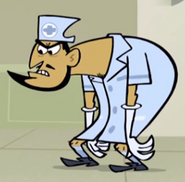 Felonious Hexx in Nursing a Grudge

He was shown as a professional magician. He wowed the crowd with incredible feats of secretly real magic. However Gus, being his usual self, was not impressed with the show no matter how amazed the rest of the audience was, and continually jeered, insulted and mocked the otherwise brilliant magician. This led Hexx to become furious enough to lash-out at him with his magic; trapping him inside his hat. Later, he did the same with Tommy and Robotboy when they went backstage to search for Gus.

Hexx became a nurse at Gus and Tommy's elementary school where he spent his days removing the lice from children's heads and begging them to let him perform at their parties to no success (conjuring ferocious tigers in front of small children is not as good a sales pitch as it should be). Unfortunately, Hexx encounters Gus who, forgetting how powerful the former magician is and how much danger he was in last time, continues making fun of him. The enraged magician-turned-nurse decides on a little surgery and swaps Gus' mind with a pigeon.

Robotboy still manages to stop Hexx from any more magical mayhem, using a table to reflect his magic that was meant for Tommy back at him, transforming him into a mouse. Hexx then vows that they haven't seen the last of him and vanishes in a puff of smoke, leaving Tommy and Robotboy to wonder what to do with Gus, who was still a pigeon. This worked out well for everyone, however, since the pigeon was nicer, and smarter than Gus and also gave the science teacher, Mr. Larson, free eggs!

This time Hexx works in a dentists office, once more using his powers in a position beneath him, and where he encounters Gus for the third time. Gus once again forgets Hexx both hates and is willing to hurt him when he starts belittling him like he had done during their prior meetings. Hexx puts Gus into a hypnotic state before he begins operating on his rotting mouth (after taking some necessary precautions, first).

Eventually Hexx is defeated, again, and the teeth become lodged in his own mouth just as the bikers chasing the big mouthed Gus arrive.

Felonious dressed as an obese Scottish nanny named Mrs. Loutfire (An obvious parody of Mrs. Doubtfire) and was hired by Deb to discipline Tommy and Gus for their (mostly Gus') reckless and wild behavior. Hexx uses this as his chance to use his magic on Tommy and Gus and pay them back for thwarting him so many times before. He then proceeds to turn Gus into his own, personal zombie slave while also destroying priceless vases and ordering pizza from long distances. Just as he was about to finish off Tommy and Robotboy, Dwight bursts through the locked door, smashing it into Felonious's face, rendering him unconscious, consequently breaking the spell on zombie!Gus and the appliances and objects he had animated with his magic. Later, Deb returns with groceries to find Tommy and Gus sitting atop Mrs. Loutfire on the couch, watching TV. The doorbell then rings and a pizza delivery man from a foreign country is standing there with pizza for a 100 people, much to Deb's dismay.

Felonious (The Tale of Two Geniuses colors) attacking Gus, from Heath Kenny's blog to promote series 2
Add a photo to this gallery
Retrieved from "https://robotboy.fandom.com/wiki/Felonious_Hexx?oldid=20397"
Community content is available under CC-BY-SA unless otherwise noted.