The Donnienator
Don't Fight It

"Halloween" is the 10th episode of the series and the 5th(b) of Season 1 of Robotboy.

It's Halloween night and Tommy and his friends are taking Robotboy out for his first time, but when Dr. Kamikazi sends monsters out he can't see what's real and what's not.

When Gus walks in to Tommy's room dressed as The guy with the mask on Halloween night, Robotboy gets scared and attacks him. When Tommy stops him, Gus is happy that his costume works and the he wasn't recognizable. Then he explains to Robotboy what Halloween is and invites him to join him, Tommy and Lola hen they are going to trick or treating, because everyone will think that Robotboy is just a boy in a robot costume.

Meanwhile Dr. Kamikazi uses a spy-cam on a bat to see what they are talking about in Tommy's room. He want to use his new army of monsters to catch Robotboy when he is trick or treating. When his army of monsters come, he is blinded by his snake pet who spits snake poison in his eyes.

Meanwhile the gang is ready to go. Lola is dressed as a cowgirl, Gus is only wearing a mask and Tommy is dressed as the hunchback of Notre Dame. But Robotboy also wants a costume. So Tommy gives his costume to Robotboy and decides to make a new costume for himself. He makes a Robotboy costume and goes trick or treating dressed as Robotboy. While they are trick or treating they run into Kurt, Stu and Mookie. Kurt demands that they hand over their candy to him, but they refuse. Gus tries to flee with Robotboy, but is being chased by Kurt. Gus eats all of his candy so that Kurt can't steal it from him. This makes Kurt angry and he steals all of Gus his clothes (except the mask) and leaving Gus behind, completely nude. Then Lola comes in panic and tells them that in the meantime Tommy is being kidnapped by Dr. Kamikazi. Robotboy rips off his costume-part of which Gus tries to use to cover himself with- exclaiming that they must find Tommy and grabs Lola and Gus, flying into the sky.

Dr. Kamikazi is pleased with himself that he finally captured Robotboy. Tommy and Constantine are trying to explain that he didn't but he doesn't believe them. Because his eyes are still blinded by his snake, he still doesn't see that well and really thinks that he captures Robotboy, because he can't see the difference between the real Robotboy and Tommy in his Robotboy costume. He wants Robotboy to super-activate and let him make do some assignments. First he wants to see Robotboy (Tommy) to demonstrate his superpowers by opening a big vault in a bank. But Tommy only hurts his feet when he tries to kick open the door. Then he wants to see if Robotboy can protect himself. So he puts Tommy in a rhinoceros cage in the zoo and tries to wake up the rhino so that he will attack Tommy. But instead the rhino releases a big amount of gas into Kamikazi's face. When Tommy also fails to fly and rescue a kitten that Constantine threw off a satellite tower. Kamikazi has enough of "Robotboy's" failures. He takes Tommy back to his plane, strapping him to a table, threatening to bomb his house if Robotboy (Tommy) still refuses to cooperate. Tommy tries again to explain that he isn't Robotboy and that he can't Super-activate, but Kamikazi doesn't believe him, thinking "Robotboy" was trying to outwit him. So Kamikazi decides to cut him open with a band saw to steal his motherboard and learn the secret to Super-activation.

Then Constantine tells Kamikazi that Lola, Gus and the real Robotboy have found them and are here to rescue Tommy. Kamikazi then realizes that the real Robotboy is standing in front of him and that he kidnapped Tommy. He orders his monsters to fight against Robotboy. Robotboy Super-activates, fights them and rescues Tommy before he's sliced open by the saw or gets burned by the dragon. Meanwhile Gus changes the location of the bomb to be sent towards Kaziland instead of Tommy's house. Kamikazi withdraws after Robotboy has taken down all of his monsters by detaching the half of the plane he and Constantine are in, throwing Gus out in the process. Robotboy saves Tommy and Lola by grabbing them and flying out of the other half that was plummeting towards the ocean, catching Gus and saving him as well.

Afterwards, Robotboy, Tommy and Lola return to Tommy's room where Robotboy says that Halloween is exciting, whereupon Lola say's that this year was a little bit too exciting. When she wonders where Gus is, Tommy explains that he is late-minute trick or treating, scaring the people in town because he is still naked.

Robotboy, Tommy, Lola and Gus in their halloween outfits 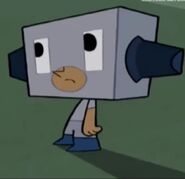 Tommy in his Robotboy costume 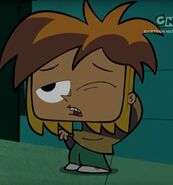 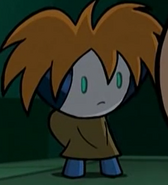 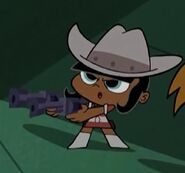 Lola in her cowgirl costume 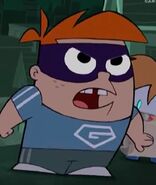 Gus as The man with the mask 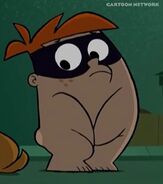 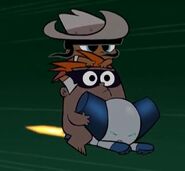 Superactivated Robotboy and Lola exchanging a thumbs up! <3

Tommy is happy to see Robotboy again, and Ro is glad to see he's okay! <3

Lola distracts the Godzilla monster so Ro can spark him out!

Retrieved from "https://robotboy.fandom.com/wiki/Halloween?oldid=18506"
Community content is available under CC-BY-SA unless otherwise noted.