"Kami-Chameleon" is the 50th episode of the series and the 12(b) of Season 2 of Robotboy.

Dr. Kamikazi sends out his Kami-Chameleons to disguise as the teachers of Tommy in his school. When Tommy finds out he sends out Robotboy in order not to get caught.

Kamikazi sends clones to Tommy’s school disguised as teachers!  When Tommy figures this out, he tries to send Robotboy back home, but his metallic companion wants to stay for gym class!  Robotboy sneaks back to school dressed as a regular kid and joins in a game of dodge ball!  As the game takes shape, it slowly becomes apparent that Robotboy is undercover and the disguised teachers and Kamikazi attempt their capture in the school gym! 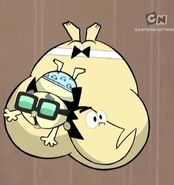 Kamikazi is to obsessed with Robotboy 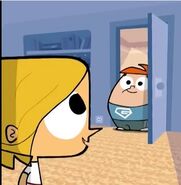 THE MOST PRESH WINK EVER!!

Retrieved from "https://robotboy.fandom.com/wiki/Kami-Chameleon?oldid=18671"
Community content is available under CC-BY-SA unless otherwise noted.