Mookie and Stu (his companions/second-hands)

Bully
Kurt is the self-centered bully at Tommy's school, he has blonde hair and wears a hat. He constantly bullies Gus and Tommy, as well as almost any other kid he finds. His father is a secret agent who has used Kurt to try and capture Robotboy. His mother is never seen or mentioned.

He comes off as more of a villain than a bully as he seems to really want to seriously hurt Tommy. as he has nearly killed him with his father's space laser satellite and giant robot.

Kurt has short hair, wears a brown hat with a light brown stripe on it, wears a dark brown jacket (entirely black in Season 1 & 2), red shirt, brown pants and white shoes, in Science Fear, it's shown he wears blue underwear.

In Kurt's Father, he wore a gym outfit. wearing a orange shirt, white shorts, orange socks and white shoes, he wore the shirt underneath his jacket. 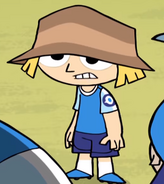 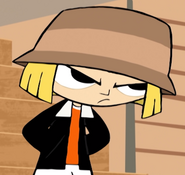 Retrieved from "https://robotboy.fandom.com/wiki/Kurt?oldid=20608"
Community content is available under CC-BY-SA unless otherwise noted.