"Metal Monster" is the 7th episode of the series and the 4th(a) of Season 1 of Robotboy.

When a news reporter called Vance Cosgrove finds out about Robotboy he tries to find more about him from other people so that he can become promoted only that a secret government steals Robotboy into their laboratory and the gang must save him. 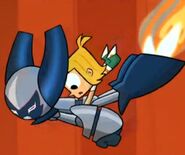 Nice save!
Add a photo to this gallery

Retrieved from "https://robotboy.fandom.com/wiki/Metal_Monster?oldid=18202"
Community content is available under CC-BY-SA unless otherwise noted.