Bully
Mookie is one of Kurt's companions/friends and one of Tommy's bullies, In the absence of Kurt, he is the leader when he's with Stu only.

Mookie is bald and small, he wears a beanie with a skull on a black circle which happens to have a bowling ball hidden inside and uses it for defense, in Fight, it's revealed that he's bald. He happens to wear a green-blueish shirt with a black spade on a white circle, he wears grey-ish blue pants, white shoes and a golden ear-pierce on his left ear.

Mookie without his Beanie 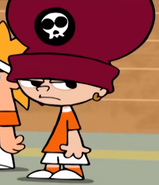 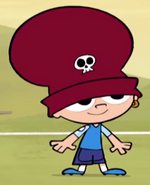 Mookie in Foot Brawl
Add a photo to this gallery

Retrieved from "https://robotboy.fandom.com/wiki/Mookie?oldid=20615"
Community content is available under CC-BY-SA unless otherwise noted.