Years later, after hearing about Protoboy, Robotboy, being sad that he had no family of his own, traveled to Kamikazi's lair and reactivated Protoboy and tried to turn him good again, but to no avail. Protoboy was seemingly destroyed in a explosion, but he would later make several comebacks later on determined to destroy Moshimo and the rest of his robots.

Professor Moshimo created Protoboy many years ago after getting out of the academy. But because of the Professor's young age, Protoboy lacked humanity and was quite vicious. He was later kidnapped by a young Dr. Kamikazi who turned him evil so he could rule the world, but he made him too evil, to which Protoboy was deactivated after being defeated by Constantine.

After Robotboy reactivates him, Protoboy becomes full of rage and decides to destroy everything near him. Robotboy tries to be nice to him, but Protoboy doesn't stand for this. He shows disdain for Robotboy`s friendship, and attempts to "destroy" him. When Robotboy superactivated, Protoboy did as well. Robotboy was nearly defeated until he used the new weapon Moshimo gave him, which is essentially a limpet mine. As a result, Protoboy seemingly was destroyed.

He came back in "The Revenge of Protoboy" where he secretly threw a meteor at Robotboy Tommy and Gus. Robotboy destroyed it. Before Protoboy revealed himself, Tommy expresses disbelief as Protoboy was seemingly blown up, Protoboy states that he isn’t "so easy to destroy" and he will get revenge on his brother. He superactivates and brutally attacks Robotboy and nearly kills him, when he gets a phone call from someone her refers to as "dear", he states that he doesn’t have time to finish Robotboy but he will be back.

He doesn't show much emotion, as he mostly speaks in a monotonic voice and his face is often static. He shows a enjoyment in destroying things and causing harm to people. He also has an enjoyment for fighting, such as in "The Revenge of Protoboy" when he says that combat with Robotboy would be exciting. He seems to be jealous of Robotboy, as implied in "The Old Switcharobot" when he said to Moshimo when he was going to attack him that Moshimo likes Robotboy better then him. Even though he is said to be incapable of emotion or empathy, he seems to have a ally who may be his girlfriend.

Protoboy's powers can be sectioned by his modes of

His Vision is similar to Robotboy's, albeit it's red.

Like Robotboy, and has enchanced strength and speed. He is shown to be able to lift a big cruise ship.

He also has two blasters which sprout from his right hand, he is able to fire both lasers from them, the bottom one can also fire bullets.

He is shown to have a set of scissors which sprout from his knuckles.

According to Jan Van Rijsselberge he posses the knowledge to modify machinery.

He resembles his brother Robotboy, however his mouth is static (apart from the flashback in "Brother" and an animation error in the present), his eyes are always red, his head shape isn’t round, his ears, feet and hands are black with a gold shading, his fingers, wrists and kneecaps are gold, he has circuits on his forehead, his waist is gold, his crotch is black, he's also shown to be taller than Robotboy and around Tommy's height. 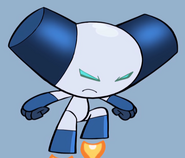 Protoboy in Robotboy's body
Add a photo to this gallery

Protoboy has only appeared in 5 episodes which are the following; "Brother", "The Old Switcharobot", "The Revenge of Protoboy" "Donnie Turnbull's Day Off" (cameo in Robotboy's body in flashback during the montage of Donnie being abused) and "The Return of Robotgirl."

A very bad relationship, he shows no affection towards his younger brother and has tried to kill him many times. "The Revenge of Protoboy" in particular shows his cruelty to him well, as he took pleasure in tearing him apart and tried to kill him, only stopped by getting a phone call from "His Dear". Later he didn’t care that Robotboy didn’t want to fight and disregarded that fact they were brothers. After seemingly destroying him, he cruelly remarked that he wished Robotboy were there to see him destroy the ship and kill all the people on it.

Not a very good relationship together with Tommy. He almost destroyed him on six occasions, two in "Brother", three in "The Revenge of Protoboy", and one in "The Return of Robotgirl".

A very bad relationship, In the episode "The Old Switcharobot" when Protoboy was inside Robotboy's body he punched Gus out of Tommy's window when Gus was saying many awful things about him. In "The Return of Robotgirl", he almost destroyed him for tricking him that he's Moshimo's other robot.

A bad relationship. Before he was reprogrammed, he was rather hostile to him, though this may have been a result of his lack of humanity. After being reprogrammed, Protoboy hates how Moshimo likes Robotboy more then him. And has tried to kill him at least 4 times, two in "Brother", one in "The Old Switcharobot" and one in "The Return of Robotgirl".

A bad relationship. Like with his brother, Protoboy doesn’t show any compassion for her, and tried to lie to her to destroy her, Robotboy and Moshimo.

In the episode "The Revenge of Protoboy" he spoke on his cellphone to his dear (as he calls her). Although it is unknown which character he spoke to but it could've possibly been his girlfriend since he gives her a kiss when he had finished speaking to her.

Protoboy in his Deactivated Form

Vs Robotgirl
Add a photo to this gallery
Retrieved from "https://robotboy.fandom.com/wiki/Protoboy?oldid=20871"
Community content is available under CC-BY-SA unless otherwise noted.