Robotboy is a robot built by Professor Moshimo. He was designed to resemble a real boy. Robotboy has three activation modes: deactivation, where he resembles a doll; normal, where he is roughly Tommy Turnbull's height; and super activated, where he is twice Tommy's height, and has a plethora of machine guns and rockets. During the opening, it's stated that Robotboy was given to Tommy for Robotboy to learn how to be more like a human boy, but it is not stated how long he had been activated or why Tommy was his chosen guardian (we can presume that Moshimo's reasoning is behind Tommy being his number 1 fan)

Robotboy is roughly 30 cm (about 1 foot) in Deactivated mode, 45 cm (1.5 feet) in Activated mode, and 182.5 cm (6 feet) in Super-activated mode. However, if you include his ears, SA Robotboy would be 7 feet tall, greatly towering over any adult in the show, even Kurt's Father.

"Robotboy is a robot with three modes: Deactivated, Activated and Superactivated. While deactivated, he becomes small enough to fit into a backpack. As well as being incredibly almost indestructible, Robotboy has an emotional chip that makes him think and feel like a real boy."

Robotboy is naive, and is very easily led (most often by Gus, and into certain negative situations). However, when things come down to the wire, he's often the first to react and has a fair understanding of his surroundings and circumstances.

Robotboy is overprotective of Tommy and his friends (and Robotgirl during their brief encounter) On more than one occasion, he's been openly willing to do anything to keep each of them safe. If Tommy orders him to stop though, Robotboy will stop almost instantly. Robotboy's over-protectiveness is more blatant in the beginning episodes of the first season, then again near the end of the season. This cycles throughout the first three seasons that were aired.

He is shown not to like dishonesty, and has a fair bit of respect for those around him (except for Gus). He appears to like having fun with Tommy and on occasion Lola.

Robotboy was created by Professor Moshimo as a force to protect the world from threats after Protoboy failed. But because he was in danger he was then passed to Tommy to learn more about humanity, which is the base of the show.

Robotboy's powers can be sectioned by his modes of activation.

Tommy is Robotboy's keeper and best friend. Having the biggest interaction with him, they mostly spend together in many different adventures whenever they have free time or whenever danger presents itself. They often have each others' backs, but Tommy is often the one to be saved. However, even best friends have their off-days. Because of him being so naive, Tommy (most of the time under the influence of Gus) will sometimes take advantage of Robotboy in order to get something he wants or to skip his regular childhood life of school or a few other things.

Though Tommy is his best friend and always promises to teach him how to be a real boy or buy him things, the act on Robotboy's secrecy often hurts the little robot's feelings and puts him at odds with Tommy whenever he goes off to do something fun or cool and leaves him behind. However, in the end, they always managed to put their differences aside and stay the best of friends. Robotboy's over-protectiveness of Tommy can be seen throughout the series, and is most prominent in "Mancation" when, as he's stuck in Superactivated mode, he protects Tommy from any type of danger he sees him in-including Dwight dressed in a bear-skin, despite Tommy claiming he's alright and not in any danger.

Good friends. While they don't have a large amount of interaction, Robotboy has shown some protective tendencies around Lola, and they get along decently. In "Halloween", he (in Superactivated mode) gives her a thumbs-up as his way of thanking her for helping take care of the dragon monster and in "The Homecoming", he looks very surprised when she kisses him goodbye. Robotboy treats Lola with much kindness and respect as she does in return.

Robotboy is friends with Gus, (albeit grudgingly). Gus has been known to manipulate and use Robotboy for his own gain. Due to this, Robotboy is often at odds with Gus by the end of an episode or sometimes even in the middle of one. Even so, Robotboy has shown to be protective of Gus, as well, and has rescued him many times. During the spat with Tommy in "Runaway Robot", Robotboy chose to live with Gus since he was more care-free and fun than Tommy and would let him do whatever he wanted on the condition that Gus didn't boss him around.

Good friends. During their first meeting in "Robot Girl", Robotgirl and Robotboy were very friendly with each other-although Robotboy was afraid of her at first but then quickly warmed up to her while playing tag. Robotboy becomes protective of Robotgirl, shielding her from the bat clones before their capture, then not willing to let Tommy leave her behind in the clutches of Dr. Kamikazi, and lastly helping Tommy try to understand her feelings after she was repaired in "The Return of Robotgirl". As she was built after Robotboy, Robotgirl often has to learn things from Robotboy the hard way. It is theorized that Robotgirl is either just a friend or his younger sister, seeing as to how Moshimo had built her, too. In order to first Superactivate, Robotgirl had to imagine never seeing Robotboy and Tommy again, which prompted her transformation to save them (and Constantine) from being crushed, signifying that she has gained some protectiveness over the two of them.

Enemy. Kamikazi has tried on many occasions to reprogram and clone Robotboy or destroy Tommy, to no avail. Because of this, Robotboy despises Kamikazi and is always ready to give him a good thrashing whenever he shows up.

Enemy. As he works with Kamikazi but is not always in the area of attack, Robotboy and Constantine do not interact directly often but has fought with each other in some episodes. In some way Constantine is rather a potential opponent to Robotboy, getting the best of him short-handily where other villains could not. However, Robotboy seems to be more tolerable and sometimes friendly with Constantine when he's not doing Kamikazi's bidding and being nice to Tommy and his friends. Robotboy even rescued Constantine a few times from harm ("The Consultant", "Bad Language" and "The Legend of Brainy-Yak")

Enemies. Both are bent on destroying the other (as per robot fighting rules), but are perfectly equal. Because equality in strength it said by Moshimo that they could fight for eternity until one of them destroys one another.

Enemies. Although they were friends at first, Protoboy's attempts to cause havoc and to kill Tommy stopped these attempts in their tracks. Robotboy allegedly destroys Protoboy, but it is revealed in a later episode that the attempt proved futile. He returns again, this time outright eliminating Robotboy, but fails and is, again, apparently killed. As per usual, he returns again and tries to eliminate Robotboy and Robotgirl, but was defeated once again and killed for good. Despite being enemies to each other Robotboy has feelings for him and tries to convince him to be good instead of being evil since they are brothers after all.

Robotboy has been compared to other shows with similar characters numerous times. First Astro Boy, of which it has been referred to as a clear rip-off by some people. The similarity may be related to the fact that the 2003 version of Astro Boy had also run on Cartoon Network about two years prior to Robotboy. Secondly, it's also been labeled rip-offs of "My Life as a Teenage Robot", a show on Nickelodeon, and "Whatever Happened to Robot Jones?", another show on Cartoon Network. On My Life as a Teenage Robot, Jenny Wakeman is a robot who acts like a normal teenager and is a superhero, which Robotboy is, while Robot Jones is learning about the very basics of human behavior, which Robotboy is doing as well. Lastly, Robotboy shares several very close similarities with the popular video game character Mega Man, such as a similar color and body appearance, an evil scientist who has a history with the main heroic scientist as the main villain, and the use of a "Prototype brother" robot as a plot-line. Also, in the episode, "Sweet Revenge", the pilot of the helicopter is seen bearing the symbol of the rebel forces from the Star Wars series. Robotboy may actually be a coincidence or an homage to those franchises. Robotboy as a character is really exempt from controversy. Short of Kamikazi, Robotboy is one of the characters with the highest amount of controversy. Popular reasons include:

- His coloring in comparison to other characters

The Robotboy Wiki has a collection of images and media related to Robotboy. 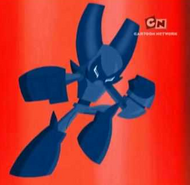 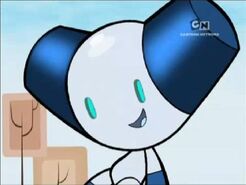 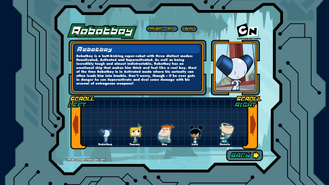 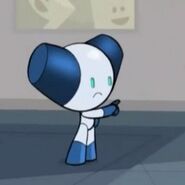 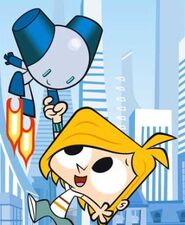 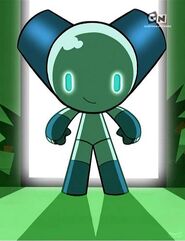 Robotboy stepping out his storage unit 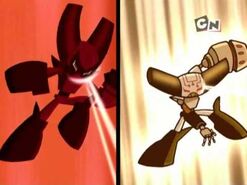 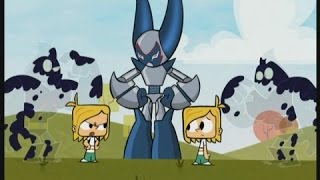 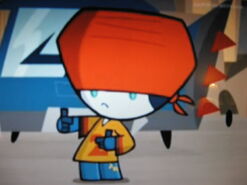 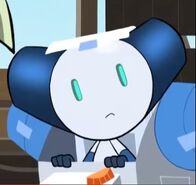 RobotBoy in his backpack 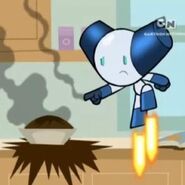 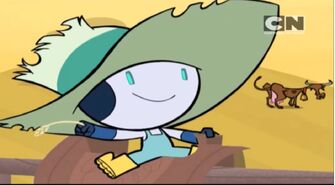 Having fun on the farm 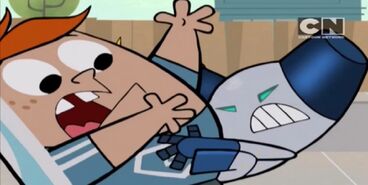 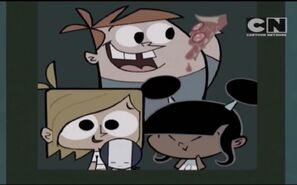 Robotboy with his friends: Tommy, Lola and Gus 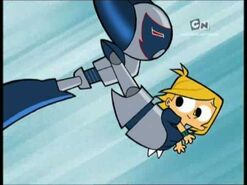 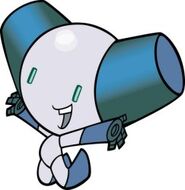 You will always be my best friend <3 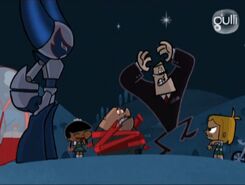 Superactivated Robotboy is a big robot! This may be an off-model thing, but he's still huge nonetheless.

That smile ♥
Add a photo to this gallery