Bully
Stu is one of Kurt's friends/companions. He is the large and stupid one.

He wears a blue hooded top with a red cap, light-blue pants and white shoes. 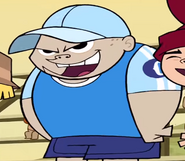 Retrieved from "https://robotboy.fandom.com/wiki/Stu?oldid=20611"
Community content is available under CC-BY-SA unless otherwise noted.