You're so dumb that when you go to the mind-reader, you get half price! - Teasebot

"Teasebots" is the 5th episode of the series and the 3rd(a) of Season 1 of Robotboy. Dr. Kamikazi creates an army of Teasebots to take advantage of Robotboy's temper. Robotboy destroys so many Teasebots that his batteries run dry and he is easily stolen by Kamikazi. 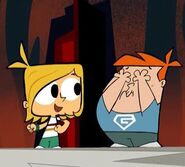 Kamikazi in his 'panic room'

Retrieved from "https://robotboy.fandom.com/wiki/Teasebots?oldid=18365"
Community content is available under CC-BY-SA unless otherwise noted.