"The Tune Up" is the 36th episode of the series and the 5th(b) of Season 2 of Robotboy.

Gus uses Robotboy to download the latest video game technology, but Robotboy catches a computer virus and starts thinking that everyone is an alien! With Moshimo too busy to help, Tommy is recommended a robot doctor, who is duly kidnapped by Kamikazi and Constantine. The evil Dr. tampers with Robotboy so that he becomes uncontrollably violent. With options running out fast, Moshimo sends Tommy a termination software package, to end Robotboy’s days for the good of humankind. Suspecting that something might be awry, Tommy neglects to install the software and simply deactivates Robotboy. Kamikazi still in his guise as a Robot repairman offers to take the ‘deceased’ Robotboy away. Finally twigging what has happened, Tommy activates Robotboy and sets him lose on his evil tormentors!

The episode begins with Gus showing Tommy Omega II, which hasn't even been released yet. When Tommy asks how he got it, Gus replies "Arr, it's a pirate life for me!" and runs off.

Back home, Tommy sees Robotboy acting weird, thinking he's on the planet Omega. That makes him find out that Gus used him to download Omega II off the internet and it got him a virus. While confronting Gus, Robotboy's vision mistakes he boys as Omega overlords, causing him to punch Gus. Tommy calls Professor Moshimo about the virus, but as he's too busy repairing his space telescope he calls a repairman.

The repairman had been hijacked by Dr. Kamikazi and Constantine, with the latter taking his place. Constantine places an implant in Robotboy without anyone noticing, then leaves. While Tommy is distracted by a phone call from Gus, Robotboy, affected by the implant, sees Mr. and Mrs. Turnbull walking outside, but sees them as citizens of Omega. Luckily, Tommy deactivates him before he could destroy them. Dr. Kamikazi appears as another repairman and tightens his implant into Robotboy's system. He tells Tommy there's no use, as the virus had spread through his brain, and the only thing to do is to destroy him. Tommy is reluctant to that, but he sees Robotboy wrecking the city soon after, and deactivates him before he could obliterate a dog.

Tommy calls Professor Moshimo, who tells him that Robotboy has become a serious threat, and that he's not himself at all anymore. He regrettably e-mails his ctrl-alt-delete software to Tommy, who is also reluctant to destroy Robotboy. Dr. Kamikazi tells Constantine that their plan to find the secret to take over the world is working, and explains he's to take Robotboy apart and use him to create evil Robotboy clones.

Tommy puts Robotboy's deactivated form in a small box and heads outside, only to be stopped by Dr.Kamikazi and Constantine. Kamikazi tells him there was nothing wrong with Robotboy in the first place, and it was his implant that did all the work. Tommy, in turn, explains that he never used the ctrl-alt-delete software and merely pretended to destroy Robotboy with it. He activates him, and Kamikazi sends out his minions. Robotboy super-activates and destroys a couple of them, but one of the remaining robots wraps him with his arms to trap him, and another puts his arm on Robotboy's chest to electrocute him, but it backfires and destroys the remaining minions. Tommy runs to Robotboy, glad he's back to normal, and they exchange a hug as Kamikazi drives off.

Tommy calls Professor Moshimo, telling him that Robotboy is okay, and that Kamikazi was behind everything. Moshimo asks to speak to Robotboy, but Tommy says that he needs one more thing to take care of, and Robotboy is seen chasing Gus while exclaiming "DESTROY OMEGA FREAKS!".

Tommy: Yes, Gus? What do you want? You wanna use him to pirate another game?! You can't use Robotboy to pirate Veggie Wars III: The Reckoning! I SAID NO, GUS!

Professor Moshimo: We all love Robotboy, but with this virus he's not really Robotboy anymore... just a ruthless engine of destruction.

Tommy: You will always be the best friend I ever had, Robotboy...

Dr. Kamikazi: It will work for us, from beyond the grave! Once he's terminated, I'll take him apart and run the secret of superactivation, and create an army of evil-ish Robotboys!

Tommy: Oh, but it's not too late... I never used this! (Holds up the ctrl-alt-delete disk) I couldn't destroy Robotboy! I pretended to use it! Game over, Kamikazi. (Activates Robotboy) Let's get to work, Robotboy!

One of the deleted scenes. 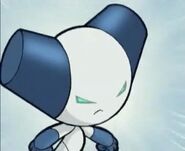 The "grey background" that can be seen on 1 frame of the animated transition.

I never used this

Retrieved from "https://robotboy.fandom.com/wiki/The_Tune_Up?oldid=17830"
Community content is available under CC-BY-SA unless otherwise noted.