Who wants to see some Vegas reject trying to pass off a load of lame cardtricks as magic? - Gus

"Tragic Magic" is the 76th of the series and the 12th(b) of Season 3 of Robotboy. In this episode, Robotboy, Tommy and Gus visit a magic show featuring Felonious Hexx. When Gus makes fun of him through the show the magician transports him into his magical world where he's going to make Gus suffer.

Background design of the theater from this episode

Design for the saw fish

Act 1 storyboard. Matt Jones: This is Act 1 of my board. I had a groovy episode based on an outline by Heath. Tommy, Robotboy & Gus get trapped inside a surreal, fantasy world created by an evil magician. 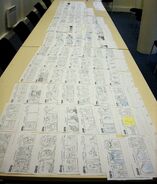 A changed story. The scene with the Gus frogs replaced a story with Gus cows. On the right side you still can see the original scene

Alphanim promotion cell
Add a photo to this gallery

Retrieved from "https://robotboy.fandom.com/wiki/Tragic_Magic?oldid=18859"
Community content is available under CC-BY-SA unless otherwise noted.