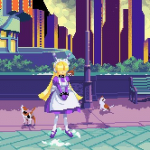 I`m usually civilised to people,but can be cruel when pushed.

So much so,that I got 2 Global Bans on Wikia(they`ve expired now) for cussing at others.

I`m trying to keep it under control for now.

I usually play Games and watch Cartoons/Anime to pass the time.

Even if it`s just via Phone or 3DS.

How I discovered this Show

I watched it while it was still fresh,but my Sister said it was childish.

I was really put off by her view on it, and didn`t watch it again until 2011.

and I taped a lot of it.

I watched the Show most nights,and didn`t care if my sister saw me watching it in the Day.

However, I began to realize that I watched the entire Series.

I looked at this Wiki,and I saw Vandal Pages everywhere.

I didn`t think much of it back then,but I decided to adopt it about a Year later,so I`m not as obssesed with it as I once was, but will take some time to expand this Wiki,and give it the database it deserves.

Retrieved from "https://robotboy.fandom.com/wiki/User:Klonoamiyumi?oldid=6265"
Community content is available under CC-BY-SA unless otherwise noted.