"Valentine's Day" is the 46th episode of the series and the 10th(b) of Season 2 of Robotboy.

In this episode, when the kids celebrates Valentine's Day, Dr. Kamikazi thinks off a way to kidnap Tommy and his friends, including Robotboy. 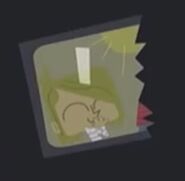 Picture of Tommy in Lola's locker

Thank you for saving me

Your attack was ineffective!

You can't sneak up on Robotboy.

Retrieved from "https://robotboy.fandom.com/wiki/Valentine%27s_Day?oldid=17198"
Community content is available under CC-BY-SA unless otherwise noted.